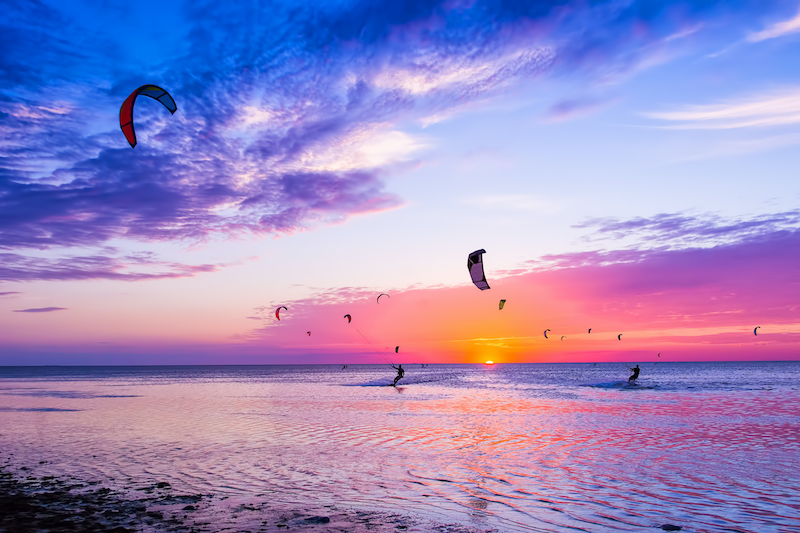 Kitesurfing in Cabarete: Those of you familiar with the Dominican Republic will know that Cabarete Town is the home of water-sports here in The Dominican Republic. Water sports enthusiasts from around the world make their way to these shores to take advantage of the trade winds and the natural reef that together create the perfect environment for kite-boarding enthusiasts. Conditions here are pretty good all year round however from May until August, offshore winds reach as high as 30 knots.

Kitesurfing was originally patented in 1977 by a Dutch gentleman Gijsbertus Adrianus Panhuise, but not much commercial interest was shown in his idea at the time. In the early 80’s an inflatable kite design was patented by French brother’s Bruno and Dominique Legaignoux, and from that point on, Kitesurfing literally began to take off.

When I first arrived to The Dominican Republic in the early 90’s, there were windsurfers as far as the eye could see, but that was about to change. A very dear friend of ours Marcus Bohm was one of the original pioneers that helped kitesurfing gain traction here on the north coast, and now, for as long as I can remember, there are now kites flying as far as the eye can see. Marcus has done so much within the area of Cabarete, not least in helping encourage youngsters to enjoy the same love for the ocean that he has, and because of that, it’s not unusual to see Dominican athlete’s now competing at the highest level.

For those of you that have never been kitesurfing, but feel like this is something you might be interested in taking up, have a look at this video link courtesy of Flukes Kitesurfing which takes you through the basics.

For more information regarding kitesurfing in the Dominican Republic, check out Laurel Eastman kiteboarding lessons here.