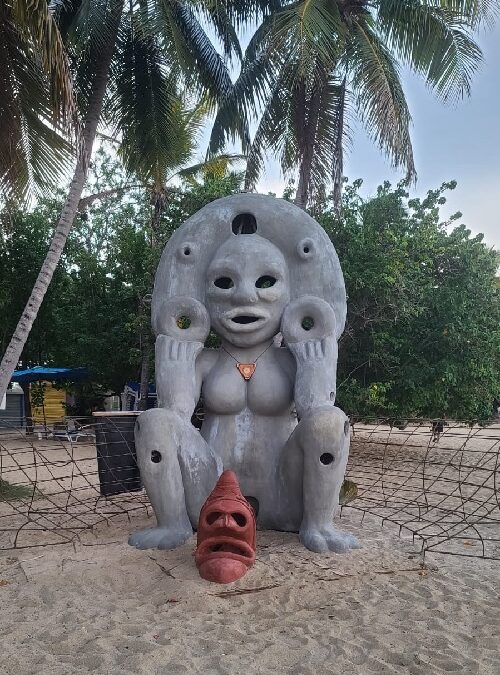 In an unprecedented effort to regenerate and support coral reef growth in The Dominican Republic, the NGO Global Coralition is well underway with this amazing initiative to submerge a 20 foot statue of Atabey, the Taino Mother Earth spirit, into the tropical waters of Sosua Bay. Global Coralition is an organization that combines art, science and education to help rebuild marine eco systems, they also help to raise awareness among local communities about the importance of protecting marine life.

Atabey is the first of a series of sculptures slated to be placed under water to create a vibrant Marine Garden here in Sosua. This will help regenerate coral growth and provide the perfect environment to accelerate and replenish marine life within the area. The project will also be supported by a prototype land based coral farm which will be located at Playa Alicia and produce resilient coral strains. These will eventually be transplanted to the Marine Garden once mature.

Atabey will be the largest underwater sculpture in the world once submerged. It is made primarily of steel and marine concrete which provides the perfect surface for coral to latch onto. A series of openings on the statue itself will allow for the transplantation of hundreds of farm grown coral. A scientific technique known as micro fragmentation will be used which allows new coral to grow at a rate 50 times faster than normal.

It is estimated that coral reefs have been depleted over the past 30 years by a staggering 50%, and unless we act quickly, further estimates state that we will lose 90% by the year 2050. Programs such as this are of utmost importance if we are to preserve this vital component of our marine ecosystem, and coral plays a huge part.  Did you know that coral reefs support 25% of all marine life and protect coastlines by absorbing 95% of all wave and storm energy?